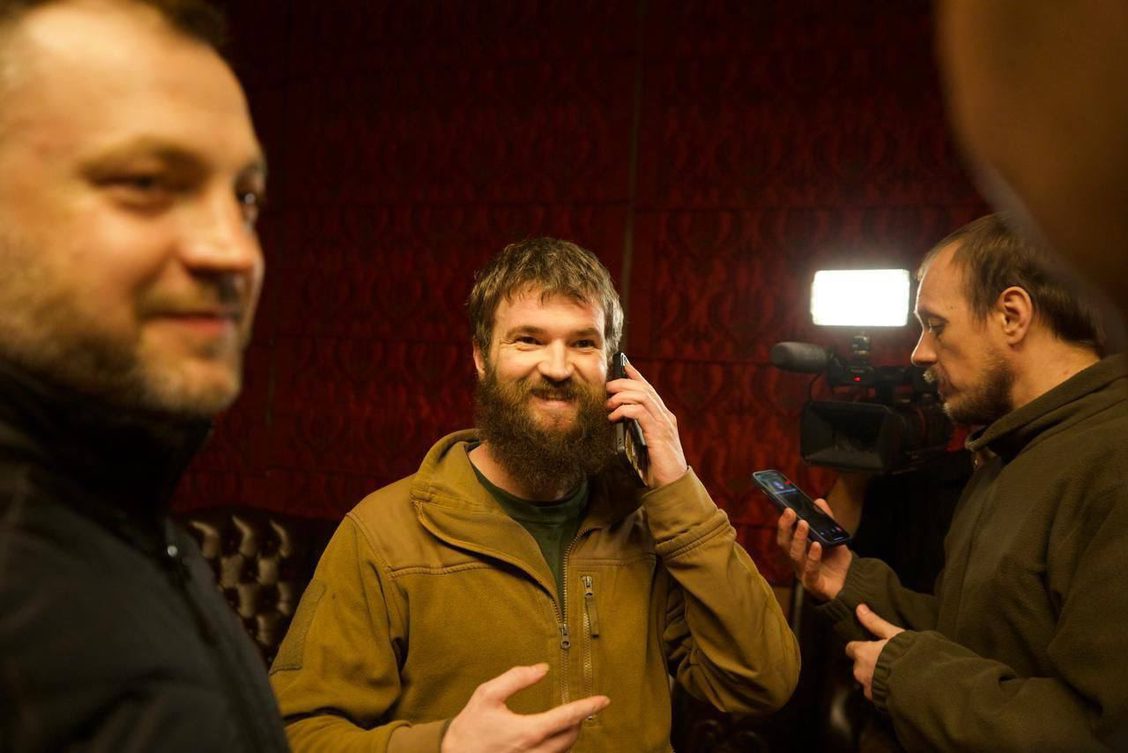 Commanders of the Azovstal defense were among the 215 people released from Russian captivity in a massive prisoner exchange on Sept. 21. One of the commanders is pictured here in Ankara, Turkey, where the commanders spoke via teleconference with President Volodymyr Zelensky after their release.

Pro-Kremlin politician Viktor Medvedchuk handed over to Russia in exchange for 200 POWs. Ukraine’s most high-profile pro-Kremlin politician and Putin’s right-hand man in Ukraine Viktor Medvedchuk was part of a prisoner exchange between Russia and Ukraine that took place on Sept. 21, according to Deputy Head of the President’s Office Kyrylo Tymoshenko. The prisoner swap returned 205 Ukrainian soldiers and 10 foreign fighters.

Foreigners sentenced to death among those freed in Saudi-brokered POW swap. Russia on Sept. 21 released 10 prisoners of war from five countries, some of whom had been sentenced to death by Russian proxies in Ukraine’s east, in a prisoner exchange brokered by Saudi Arabia. Three of the prisoners exchanged include Britons Sean Pinner and Aiden Aslin, as well as Moroccan citizen Saadoun Brahim, previously sentenced to death in a sham trial in Russian-occupied Donetsk.

Zelensky: Mobilization of Russian reservists won’t change Ukraine’s plans. President Volodymyr Zelensky said in an interview with the German newspaper Bild that Russian President Vladimir Putin’s order to mobilize additional troops was expected and points to Russia’s shortage of officers and other military personnel. Zelensky said that, according to Ukraine’s intelligence, Russia has already been carrying out mobilization over the past month. 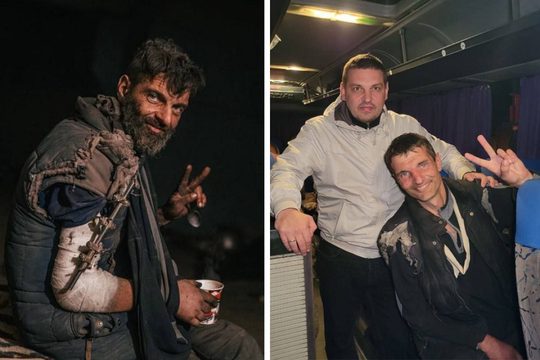 Ukraine returns 215 POWs, including Azovstal defenders, from Russian captivity. Russia released 215 prisoners of war, 205 Ukrainians and 10 foreigners, in a prisoner swap on Sept. 21, according to Andriy Yermak, the head of the President’s Office. 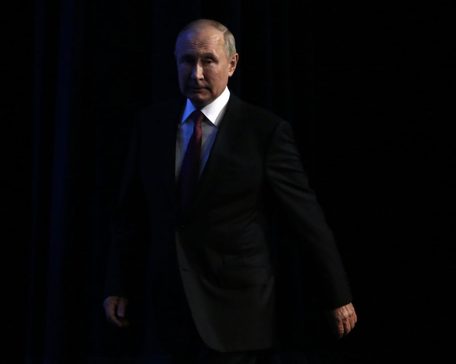 Russian hawks criticize regime’s war effort as Putin raises stakes. The Kremlin’s defeat in Kharkiv Oblast turned Russia’s pro-war camp against its leader. Now, it looks like the Russian president is trying to contain the output by promising outright expansion. 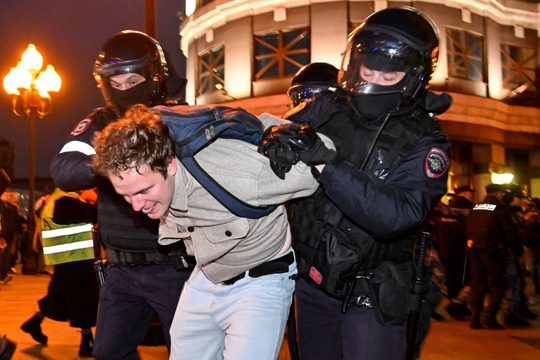 Russia’s sham referendums, mobilization, nuclear threats: What it all means. Humiliated on the battlefield, the Kremlin now wants to quickly annex occupied Ukrainian territories and add them to the Russian Federation. Russian proxies in the occupied parts of Luhansk, Donetsk, Kherson and Zaporizhzhia oblasts have announced that between Sept. 23 and 27, they will rush sham “referendums” on these areas joining Russia. Like the invasion itself, this is a violation of international law.

The human cost of Russia’s war

Governor: 6 civilians killed, 20 injured in Donetsk Oblast on Sept. 20. Over the past day, Russian troops have killed two civilians in Bakhmut, one in Toretsk, one in Druzhba, one in Velyka Novosilka, and one in Heorhiivka, said Donetsk Oblast Governor Pavlo Kyrylenko. It is still impossible to determine the exact number of victims in Mariupol and Volnovakha, he added.

Governor: Russia’s recent attack on Dnipropetrovsk Oblast kills 1, injures 2. Dnipropetrovsk Oblast Governor Valentyn Reznichenko reported that Russian forces had shelled the oblast’s Nikopolskyi district, as well as the Chervonohryhorivka and Marhanets settlements, on the evening of Sept. 21. The official said rescuers and police are working at the scene.

Biden says Russia violates UN charter. U.S. President Joe Biden commented on Russian dictator Vladimir Putin’s recent announcement of mobilization and new nuclear threats, accusing Russia of “extremely significant” violations of the U.N. charter. “This world should see these outrageous acts for what they are,” he said during remarks to the U.N. General Assembly. Biden vowed to stand with Ukraine, adding that U.N. members must be united against Russia’s war.

Council of Europe on Russia’s pseudo-referendums: ‘We reject this mockery of democracy.’ Pseudo-referendums announced by Russia’s proxies in Luhansk, Donetsk, Kherson, and Zaporizhzhia oblasts can “neither be accepted nor recognized,” said Marija Pejcinovic Buric, Council of Europe general secretary, on Sept. 21. “We reject this mockery of democracy and reaffirm our commitment to the independence, sovereignty and territorial integrity of our member state Ukraine…” Buric said.

Reuters: EU ministers agree on new Russia sanctions, more weapons to Ukraine. EU foreign ministers at the annual United Nations General Assembly in New York agreed to draw up an eighth sanctions package targeting “more relevant sectors of the Russian economy and continue targeting people responsible for the war of aggression in Ukraine,” EU top diplomat Josep Borrell said, Reuters reports. The ministers also agreed to increase weapons supplies to Ukraine. The package could be formalized in October when the ministers meet next.

Latvia’s Foreign Minister: Russia is as dangerous as Nazi Germany. Europe must not give in to Russia’s blackmail and support Ukraine as much as it can, tweeted Latvia’s Foreign Minister Edgars Rinkevics, following Vladimir Putin’s announcement of partial mobilization in Russia and annexation of parts of Ukraine. “Russia is as dangerous to Europe and the world’s peace today as Nazi Germany was in the last century,” said Rinkevics.

UK Defense Ministry: ’No amount of threats, propaganda can hide that Ukraine is winning.’ Russian President Vladimir Putin’s breaking of his own promises not to mobilize parts of his population is an admission that his invasion is failing, said U.K. Defense Minister Ben Wallace. “(Putin) and his defense minister have sent tens of thousands of their own citizens to their deaths, ill-equipped and badly led,” Wallace said on Sept. 21, following Putin’s pre-recorded video address, where he announced partial mobilization in Russia.

Monitoring group: At least 735 anti-mobilization protestors detained in Russia. Russian independent monitoring group OVD-Info said police had arrested demonstrators in 36 Russian cities during protests on Sept. 21, with over half of them arrested in St. Petersburg and Moscow.

If you’re enjoying this newsletter, consider becoming our patron on Patreon or donating via GoFundMe. Start supporting independent journalism today.

This article is under the CC-BY-SA-NC license.